pssst: new post up over at my app review page

check out the video we made for some apps:
http://appilyafter.blogspot.com/2014/07/video-review-mr-potato-head-lego-trains.html
Posted by Unknown No comments:

I have been thinking of leaving this blog. I don't write about city living any more because what we do in NYC no longer feels so unique and share worthy. And because increasingly our focus is further out on to Long Island. I would like to leave this blog intact, since there are good posts that still get page hits. I may export the app reviews to another blog. Maybe.

Change is good. Usually. We shall see.
Posted by Unknown No comments:

I am not sure why, but this year I have had trouble getting around to fundraising for the ALS walk in October. I did the walk last year, only a few months after losing my mom. So I figured this year would be just like the other years.

But I only signed up when the organizers sent an email that allowed me to sign up simply responding to the email.

And I haven't done anything else. Not even put in my own donation.

I honestly don't know what emotion is behind my reticence. But I am making this post...trying to do this thing despite my lack of motivation. Maybe I just need a little push.

So, if you have a few bucks to spare, please consider donating to my ALS page.

On "Best" Friends and rejection

Last weekend we went to the beach and within minutes Ranger had a small pack of friends, though the girl of the pack was the one Ranger faced his fear of the waves for. (Here he is trying to get the hang of turning from a wave.) 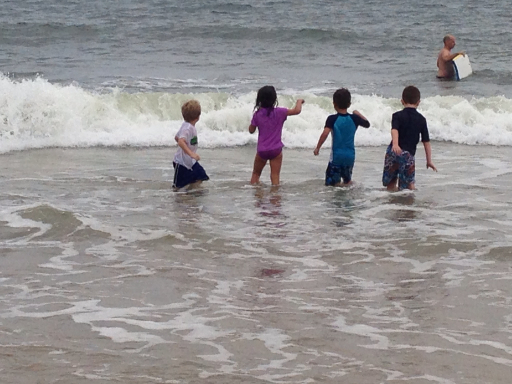 We had three and a half days of beach going and Ranger sought out every girl near his age and when he found none, sought out any kid that would play regardless of age or gender. He kept looking for at first little girl, but her family was leaving the day after we arrived. They had been in the hotel room next to us and he went out every morning looking for her.

This weekend we went to the playground and right away Ranger found some girls his age dancing. He wanted to be apart of their fun, and bless his heart he tried but he had a few things working against him. One, the girls were already good friends with each other. Two, he had never heard the music they were dancing to, and they were dancing very specific moves and sing with the music. He did try, and when their music source got a call, Ranger asked me to pull up his favorite song, the In the Jungle The Mighty Jungle song.

He sat on a step and with a very serious face held the phone up so they could hear the song. It's not exactly a dancing song. The next song was from Phineas and Ferb and the girls made an attempt at dancing but let's face it the genre of music I have on my phone for Ranger is a totally different type of genre the girls were used to. They listened through three songs and one music video (Nonagon) and Ranger took his job as DJ very seriously.

Suddenly they rushed away and proclaimed they were not allowing anyone else to play with the two of them. Ranger ran around to the other side, climbed up (I took my phone while he climbed) and tried again with the music.

He tried this twice before coming to me in tears. He wanted to be best friends with "dees two guys" (for him the gender words are interchangeable).

Oh, y'all, the look on his face when he was repeatedly turned away. He was, for his limited experience, heartbroken, and sought the comfort of my arms.

The girls had closed ranks because of a slightly older boy who was upsetting them. I would put money down that he is on the spectrum and has not yet been given the tools to know how to interact properly. He was threatening the girls with harm. He was genuinely upset when called a bad boy, and his caregiver (dad? Grandpa?- busy tending to a younger styling) just repeated that he needed to be a good boy.

So Ranger was in tears, dejected, while the two girls were trying to avoid the older boy, who was, like Ranger, following them around. The one girl's dad was there and he was doing a good job of keeping his daughter from saying mean things back and encouraging her to move to other areas. Perhaps another parent might lash out at the boy, who on first glance could be old enough to know better.

But instead I told the little girls that my little boy really wanted to play and just wasn't sure how to play. They seemed like hey might maybe be game. Then I looked the older boy in the eye, at his level, and told him in a firm voice with a neutral face that threatening to hurt people was not nice, that if he wanted to play he needed to stop saying those threats, or he could go sit on a bench and come back when he was ready to say nice things. He met my stare with a smile I have seen on many of the spectrum kids I taught. He was processing my request so I did not look away until he nodded. To give him credit he didn't say threatening things again.

The little girl had had enough, though, especially when her friend's mom came to take her home. Even Ranger's knock knock jokes could not bring her around, not as long as the other boy was there. And he wasn't going anywhere.

Ranger tried again to be friends on the swings, and was thwarted again by this other kid as well as the little girl's hesitance. When we called time to go Ranger did not want to go. He wanted to stay. Because in his mind he could still maybe be friends with this little girl.

Ranger is a hearty soul and hasn't really looked back on his heart hurts of earlier in the day. But as his mommy I will not soon forget the expression he wore and his tears. It was the first of many times, I'm sure, that he will experience rejection. It's a part of life to learn that not everyone will want to be your friend.

Have your kids experienced their first heart hurts? Rejection or teasing or other?

App review: Mo on the Go 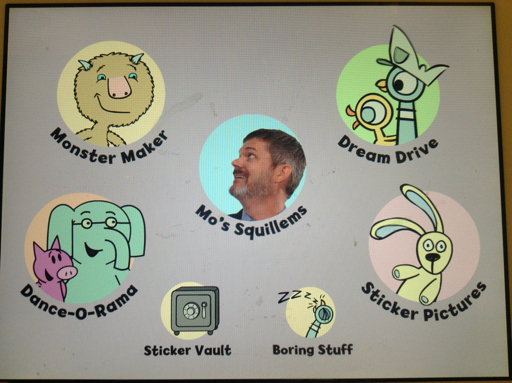 We are huge Mo Willems fans so I was super excited to find this app. So far the game Pigeon's dream drive is our favorite, so it is the only one I have video of...for some reason (probably sleep deprivation) I can't figure out why my blogging app won't embed the video. If you don't want to click, basically you draw a bus route for the bus to pick up ducklings.
http://www.youtube.com/watch?v=qJlcpiopZ3E

The monster maker game is our second favorite. You can do a random combination, or move each block until you get what you want. Then press the lightening button and watch what happens next! 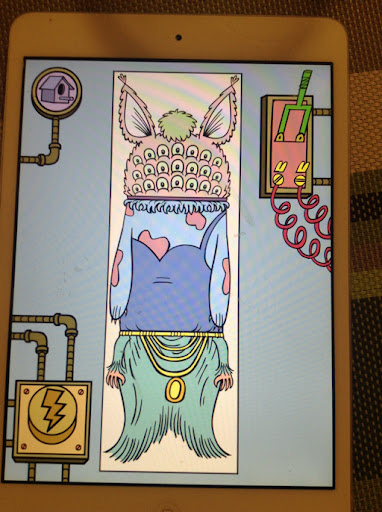 The dance game is just a matter of picking three dances for elephant and three for piggie. 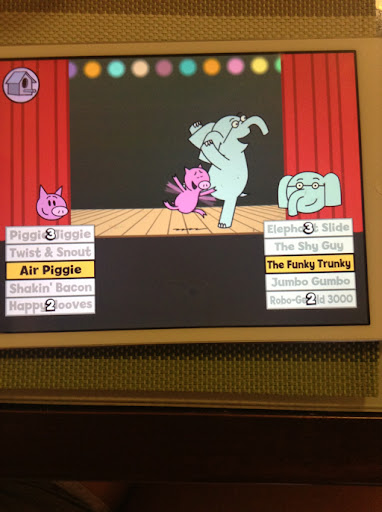 Sticker pictures allow you to take a picture and then add your favorite Mo characters to the photo.

Squillems is a drawing game where you're given a starter doodle line to jump-start your creativity.

My one and only complaint about this app is it switches from requiring landscape to portrait.it is a small complaint that is probably unique to me. Maybe I am lazy, maybe Ranger is lazy, but we tend to not want to flip the position so often.

We highly recommend this app!

Hi!
Recently we have discovered several new apps that have me and Ranger super excited! Rather than make a wall of text with lists, I am going to try to do a review for each one. 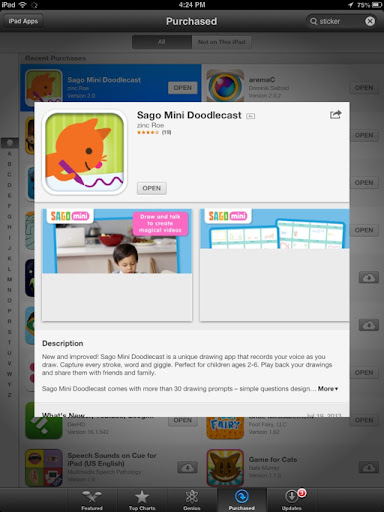 The idea behind this app is that a blank screen (for drawing) is intimidating. With a simple prompt, children get a jump start.

My favorite part is the automatic voice record. Perhaps I am alone in finding my son's imagination entertaining, but capturing his little voice as we draw is the stuff that fills my heart.

I saved one video to give you an idea of how cool this app is:

http://youtu.be/Z-oKXf2aa1A
(Having some trouble embedding- please click. You can also find several other reviews by searing "Doodlecast")

If you are on pintrest- you can follow my app board to find other neat apps (or find other people's app board collections).

Ps: I did not receive any compensation for this post. As always, I just found something cool I want to share!

If you're going to San Fransico

After we moved to Forest Hills, we had a serendipitous meeting with a family in Starbucks. We didn't know it at the time, but we had just met our BFF (best friends family).

Two...almost three years of ups and downs, of lunches, milestones, playgrounds and even a Seder, and now they have an awesome opportunity on the west cost.

It is hard to be too sad that they are leaving when technology means we will always be able to text/email/Skype, plus this opportunity is so tailor made for them.

We will miss them being here but now get to start planning a trip to San Fran in the future.

Good luck to our BFF. 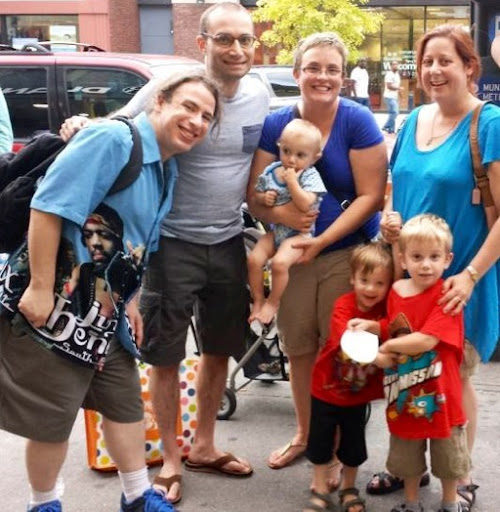 View my complete profile
The back story: In 2006 I agreed to move to NYC, but only if we could leave if I hated it after a year.