Obviously the iPad is a big entertainment/distraction tool. I am going to assume y'all know about getting videos through Netflix or apple tunes store. So.
Entertainment:
- Most of the "talking" apps, by outfit7, are really awesome.  But they can be tricky. Pop for the paid version or it's not worth downloading. {Edit 11/11/12: I got so tired of the extra things they added on that required buy in, that I deleted all of the talking apps.} Ranger did not like the dinosaur, the giraffe, or the blob that I think is supposed to be an antibody.
-That said, he loves the two cat programs, "Talking Tom" and "Talking Tom 2". In both of these you can knock the cat out. You can touch him on the foot to elicit an "ow" or "no,no,no" and of course there are buttons that cause something to happen. For some reason Ranger likes giving the original Talking Tom milk- I can guess he likes the gulping sound followed by "aaaaahhh." Ranger really likes knocking the second Talking Tom out because there is a clock with a bird that pops out and (sometimes) breathes fire.

-"Talking Larry" is a bird with piano keys under it. You can play the piano to have the bird sing. The bird also eats, and bows to applause. What Ranger really loves is the lightening bolt, that does just what you would expect- chars the bird so that it falls off its branch (it returns quickly). The other action Ranger loves is making the bird sing nonstop until its eyes bulge and poof! the bird explodes. It is all so comical that I can appreciate why Ranger laughs and laughs at these actions.

-"Talking Ben" is a dog who, as the background explains, is a retired chemistry professor. In one background he is sitting in a recliner and can be made to eat, drink, burp, and take phone calls. The the second scene he mixes vials of colored liquids. This is where paying full price is important, because otherwise you can run out of a color and have to buy more. Combining the liquids produces some explosions, smoke outs, fires, and other laughter inducing reactions. This is one app Ranger has knocked himself over laughing so hard.

-"Talking Harry" is a hedge hog. If you let him have the soda on the right, he goes all Matrix until his energy runs out. If you select the soda on the left, he goes all Kungfu Panda until his energy runs out. Ranger just likes to see the hedge hog drink the soda, so he closes out and returns to the program before the hedge hog can use the energy supplied by the drinks.

-"Talking Roby" is a dance loving robot. You can type in words for him to say (though we make no real use of this feature- I don't have the time to type before Ranger wants to play). There are three dances the robot does. He also has an air horn. And because there must be some Acme-like violence, you can drop pianos on him. Guess which Ranger likes the most.

- "Talking Lila" is a daintier app. The fairy does little spells to make flowers or bugs, sometimes her spells go awry. You can switch between a day and night setting. She also sings, with different tunes for day and night.
-"Talking Hippo" is the lamest of the ones we use. The hippo's laugh reminds me of Flipper, in other words, annoying. You can tickle the hippo, but that's about the extent of interacting with the figure. You can select to have the hippo blow a balloon up (partially), eat a carrot, suck on a pacifier, or sneeze away a butterfly.

One thing I cannot emphasize enough is turning off your in app purchasing for these apps. It is really easy to go to the character collection page and select a character to buy. The collection page does not know you've already bought some of the characters, so it will take you to the app store- to the free version, which is bunk. Equally annoying are the prompts to try new characters. When you open the program, it will prompt you to try a new app, and you can select "yes I want to try this awesome app" or "no, I don't want to try this awesome app" needless to say, if you have a toddler opening the programs, he or she can easily end up in the app store. As annoying as that is, no way would I sign up for their newsletter, even though prompts for THAT pop up randomly. Bottom line- if you can put up with the annoying aspects, the apps can be a lot of fun.

- ClickySticky is a modern day version of a sticker book. It offers several different backdrops and you can drag different things into the scene. My son loves dragging helicopters into the airport scene. He doesn't quite understand the dress up scene, but that I think he will enjoy in a few months. 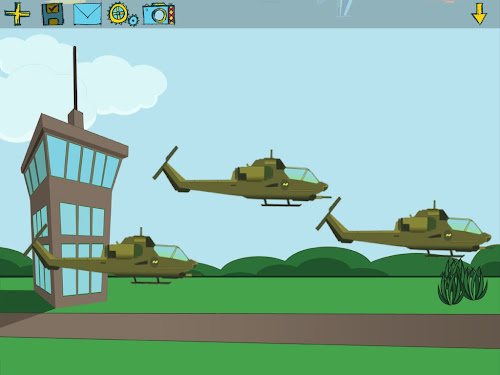 - Kidmode is a neat app that allows your child to select and watch child friendly YouTube videos. It is the best at doing this that I have seen- most attempts to filter down to child friendly slow down the content to the point of disinterest. Some of the videos are down right stupid, but there are plenty of good ones to pick from.

- GoodieWords is our newest purchase. I frequently buy apps I know are beyond Ranger's age, so that he can grow into them. There are already a few options within the app he enjoys, like making it rain then wiping the rain away to form a rainbow. He has figured out the electricity option as well. The concept is great- it explains words and concepts and provides an interactive experience to demonstrate the concept or word. A little bit I grumble at the dialog word choice and the super-duper culturally diverse character portals. *shrug* It is a personal taste issue, E didn't really find it annoying.

I am constantly on the lookout for apps to add to Ranger's electronic toy box. If you have one you recommend, let me know!
Posted by Unknown