I have mentioned before that I get to see blurbs from both parties on my Facebook and Twitter streams.

So today I was really frustrated with one thing or another (aka blatant misinformation) and wanted to find a place to refute that misinformation via a source that was unbiased. This can be hard because the perceived credibility of information is proportionate to how far the source leans in one direction or another. It doesn't matter if something is true.

There are so few perceived credible sources that I could weep for the journalists out there actually wanting to be leaders in integrity. But I don't cry for them because they as an industry did it to themselves by not fact checking and trying to be first to break a story instead of getting it right.

After a few moments of searching, I decided to back up to another issue I'd been thinking about, from another post in my feed.

So I decided, hey, let's start with voting records. I saw a post a few weeks ago where it was being claimed that House Minority Leader Nancy Pelosi wanted to take away people's guns. I don't know much about Leader Pelosi, but I doubt she's going door to door confiscating guns.  So I wanted to find her voting record on gun stuff. I figured that could show me where she stood better than what anyone said she stood. Actions speak louder than words, right?


The most recent vote appears to be about requiring states to recognize other state's concealed firearms. She voted against it.

Ok. I don't see that meaning she wants to take your guns away. And I can understand why she would say no. If you truly are a believer in state's rights, then you should find the interference of the Federal Government into this troubling. Shouldn't that be a matter for the several states to negotiate among themselves? Different states might have perfectly valid reasons for and against: if you're driving a lot across state lines, you don't want to have to get permits for each state line; on the other hand, a state may not approve of another state's accreditation procedures.

The next available vote of record for leader Pelosi comes from back in 2006.  I looked into the actual bill (since the title is somewhat nondescript). I'm not an expert but what I read was about internal standard operating procedures within the Bureau of Alcohol, Tobacco and Firearms. Although I am not an expert on these procedures, a plain reading does not indicate that they would have any direct impact on individual second amendment rights, i.e., nothing there about taking people's guns. The next vote is about locks on guns. Again, a topic of contention, but having nothing to do with the deprivation of citizens access to firearms.

So...why did I see in my time line a thing about her wanting to take people's rights to have guns? I have no clue. The voting record doesn't appear to have her looking to take anyone's guns.


SO any way, while on my hunt I came across an interesting bit of "what?" on Pelosi's voting record. I was surprised to see she had voted against the protecting women from violent acts measure. When I looked at the bill's votes, nearly every dem voted against and rep for.

Hm. That's odd. You look at the bill of the same title in the Senate and there's a much better mix of parties voting for it. So...why would people vote against it in the representatives? I click on the title and find four versions of the bill. I click on the final version and...talk about a wall of text! I skimmed through looking for something that would be a big red flag for someone voting along democratic party lines..? What?

Finding nothing, I went the the Senate version of the bill. But no way can I sit down and compare the two and figure out how they differ. But this one was very supported by the democrats, and the sponsors were democrats (whereas in the representative house the sponsors were republican). This should not be so hard. And it's not like people want women to be subjected to violence without protections. I hope not any how.

All I can say is, there is no way anyone could call this process transparent. I am guessing that titles of these things can be stated in such a way that someone looking for a quick blurb could say, well, Leader Pelosi voted against protecting women, but not see or mention something hidden in the bill that was objectionable (riders, apropos of nothing in a bill, will be attached as a matter of course; that being the way our Congress does business- unfortunately). We the voters get fed a lot of little blurbs that are meant to shock you, make you fear the other party. They are not trying to inform us--they are trying to confuse us.

Which brings us to the Patient Protection and Affordable Care Act (the "ACA").

Do you know how much rumor and out and out lying is going on with this thing? Someone I know, in a discussion in real life (not online! wow!), quoted a much used bit where Leader Pelosi supposedly said no one has read it and it has to be passed to be read. If you read the full quote and understand the context, she's not saying no one passing it has read it.

Look, it took me two years to write my thesis. Every change did not require me to read the whole thing over again. The people who had been working on that thing had been reading it for a very long time.

I wouldn't stand before an audience of rumor mill happy journalists and try to explain each point to them when it's clear from the current environment no one will listen any how.

You want to know what it says? You read it.

It's too bad she and many people in her position feel this way, because even if you or I sat down to read it, there would be confusion and misunderstandings. What would have been great was if the journalists did their jobs, read what was available to them, and asked questions that sought out truth instead of sought to perpetuate whatever spin they were currently trying to push to their consumers.

Back to what originally got me thinking about writing a post. Today I saw this gem in my feed: 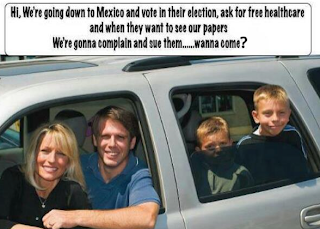 Never mind that people who are illegal here in the US cannot vote.  And for the healthcare? I'll let this really smart guy say it (bold emphasis mine).

"Actually, there are multiple parts of the bill that specifically state that the recipient of tax credits and other good stuff must be a legal resident of the United States. And while the bill doesn't specifically forbid illegals from buying insurance or getting treated at hospitals, neither did the laws in the US before the PPACA. So even at worst, illegals still have just as much trouble getting medical care as they used to." - there's a link below to his post, which included page citations within the ACA if you are curious.

So the poster who had this in his feed, with a "ha" for his comment... I guess isn't giving this much thought. For one thing, he is overlooking at least one fact (one I only learned recently myself):

In reality, that which the editorial cartoon lampoons is exactly what happens. Health care in Mexico is described as very good to excellent while being highly affordable, with every medium to large city in Mexico having at least one first-rate hospital. In fact, some California insurers sell health policies that require members to go to Mexico for health care where costs are 40% lower. Some of Mexico's top-rate hospitals are internationally accredited.cite Residents of USA, particularly those living near the Mexican border, now routinely cross the border into Mexico for medical care.


But a big thing he is overlooking is, I know he will benefit from many of the specifics of this bill (it would not be nice if his son, who is as I understand it on the spectrum, could not get care because of a pre-existing condition...which could happen once my friend's family no longer has government provided healthcare, aka his family get's the military's healthcare).

Now, if you made it this far down my rant, and are actually interested in what the healthcare law says, you might like reading this post from someone taking the time to read each section and explain it:

What is it- explained as succinctly as possible.

He also has a section by section break down, for people who need more info. But since this guy is not getting paid to do this, he has a life, and hasn't finished the sections yet.

What is sad is that some random guy is doing this and not, you know, a journalist.

If anyone knows of any data only, or neutral, non biased sources out there, please let me know! I used votegopher in the past but they are a dead site now. Factcheck.org is nice if there is a specific bit of info you want to look up, but I am struggling to find things that don't lean either way. No gotcha moments or quotes out of context. Just quantifiable facts. Because I want to be informed- but not with crap.

Update: hey, check this out:  http://www.isidewith.com/presidential-election-quiz

Second update: I ended up unfriending the one person with the Facebook posts that were just really stupid. Normally I will just roll my eyes, but posting a picture of the POTUS holding a pile of poo is not cool. I am TOTALLY up for civil discourse. I completely believe people can disagree without resorting to childish behavior. But I have no problem muting the people who spew invective without thought or reason.